We have a plan today. Playing with water in Sunway Lagoon. I had been living in KL almost 4 years now. But this marks my first time going there. I'm thinking of going to have fun. Paid RM48 for the whole day pass to two parks, water park & amusement park. There was only 4 of us. Zaza, Mym, Che & I. As usual, i am the last malay man. Hurmm. 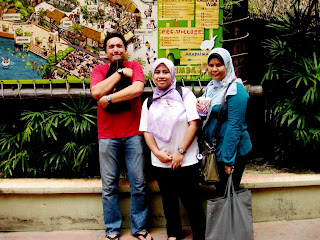 Arrived about 9.30am in the morning. OMG! There's so many people. TV9 are having their family day there. With the video rolling and all. It was hectic here in Sunway Lagoon. We went to the dressing room and change to the swim/wet clothing. Stored our bags inside the locker (which cost RM5 per token) and then Zaza mentioned that no camera shoot with the wetsuit. Hurmmm. Okay.
Went off here and there trying to find whats the RM48 worth. Haha. Found some. But most of the times we just went inside the pool and play with the water. Somehow i got the feeling that the RM48 was not worth it at all.
Finished playing with the water, everybody was tired out. But still, we have to make our RM48 worth it. So we walk up to the amusement park. Went on a ride on the ferris wheels (not thrilled about it at all!) then go up the roller coaster (hahahaha. This one was good!). Wanted to get on the swingin ship, but suddenly we heard the thunder so it kinda put off the entire mood. Decided then and there to go out to Sunway Pyramid to eat. 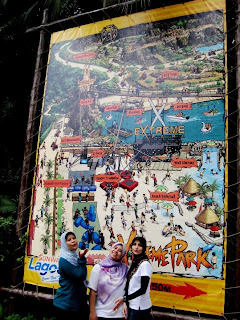 It gotten bigger and bigger than the first time i set foot in it. This time around we were trying to find the surau but somehow, everybody was tired out and everybody was hungry, and me, being my usual self got some high-voiced shoot down. Then, just like that, i lost my spirit. It has been like that since i can remember it. Its not that i was small-heart, but if someone just raised their voice to me suddenly, it will took all my spirit out of my body. I will lost my appetite and have this scared feeling to voice out anything. Just an old thing about me. Sometimes i rather refer it as my awkwardness. I can't deal with sudden high-voiced thrown at me. Still remembered that Ikram back then knew about this particular thing of me, then would just blast off anyone who dared to raised up their voice towards me. But that was long time ago. And he is no longer here.

Then i just walk up and down Sunway feeling spiritless. And i really just want to go home. The last time i was in this state was few months back when Adi 'jerkah' me out of a sudden. It really shocked me to the bone that i didn't really talk to anyone for almost a week. Adi realise it was too late and i just can't talk to him like usual anymore as i have this constant guard up whenever i am around him. Till now. 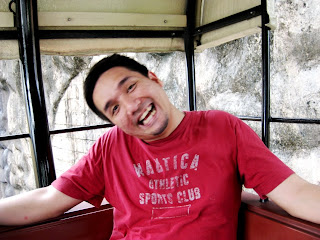 We went to Carl's Jr. But i seriously don't feel like eating. Then we decided to go back since everybody is kinda tired. Once arrived at my flat, i just dried up my clothes, done my Asar prayers and then just lied down. When i woke up, its already quarter past eight. Immediately i done my maghrib prayers then just resume to get ready to sleep after isya'. My soul still staggered from the afternoon's event. And i don't know how long its going to get away this time. Hopefully it wont take too long. But it is just something about me. Just something that really made it hard for me to change.
That is, I easily got scared off. Just by a simple high-voiced sound of another human at a sudden speed. Gosh, sometimes i just think that i am too fragile for my own good. That nite i fell asleep praying that Allah will give me a strength for me to go face another tomorrow.
Posted by Resm A. at 9:28 PM